After a day of unsuccessful waterfall hunting (all too low or landing on rocks) we were about to head back to our base in Chiang Mai, defeated, when we noticed that the river we were driving alongside had disappeared into the jungle and seemed to be dropping a bit of gradient. 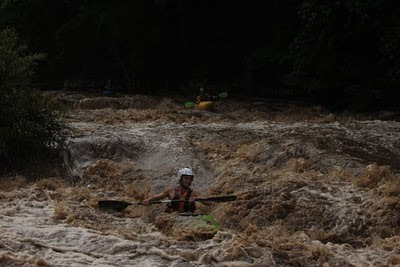 Josh, Tyler and LU on the Mae Wang

Mae Wang was a lot more swollen than all the other rivers we'd been disappointed by that day so despite the limited daylight we decided to have a quick go at it. The section turned out to be good fun and saved the day! It was no suprise that our day was such a mess as we had gone out the night before for a couple of quiet beers and a few bottles of Rum. So getting to paddle in the evening was a nice way to finally get rid of that last bit of lingering hangover. 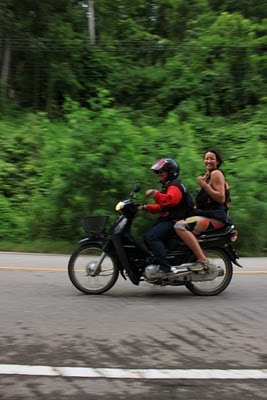 Easy shuttles in Thailand, just flag down one of the millions of scooters (p. Josh Neilson)

Back in Chiang Mai we looked over maps once again and spotted a creek even closer to town that Mae Wang that could also be swollen from the recent rains. First thing the next day we slept in a bit then got up and had French toast and other assorted breakfast goods under $2 and finally loaded the car and went searching. Within 15 minutes we were driving up the river and it seemed to have a bit of water but not that much. Eventually after no success on most of the river we found a sign to Tat Krok Nam Tok. 1km the sign said, so even though there was a lack of water we ventured up the track. Almost at the top we were startled by something moving up the track.... It was a black forest cobra. small but scary all the same!!! At the top we asked a couple of locals "Nam Tok Te Nae?" They pointed down the other side of the hill and to our surprise there was another river right there. This one had water and it also had a bed rock lining perfect for producing waterfalls!!! 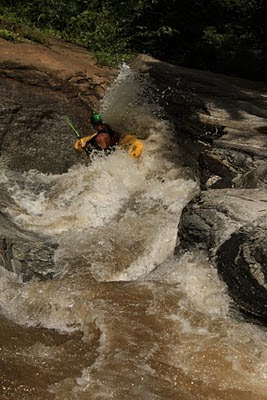 Tyler hitting up the funk lead in to Cobra Falls

We quickly headed back to the car and scurried back up the track to the drop and one by one attempted to style it. This was a lot harder than it looked with varied success over the multiple runs. 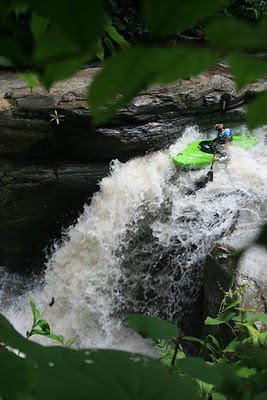 Josh getting all artsy on me dropping Cobra Falls (p. Josh Neilson)

After a few runs we decided to call it a day after Josh hit the wall and landed on his head. We decided to name this drop Cobra Falls as it looked like a snake and we saw a snake so it seemed pretty choice. 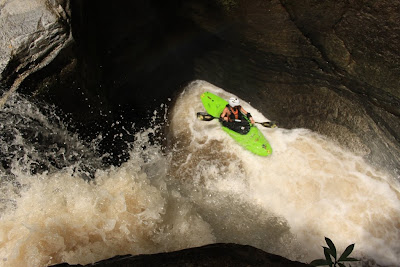 Josh checking out the cave behind the waterfall (p. Tyler Fox)

Anyway since then we have rode some sweet waterfalls and hurt just a little bit now so we are off for a massage for an hour and it only costs $4!!!! Bye for now!
Posted by Unknown at 4:37 AM