Haew Suwat - It is easier to get forgiveness than permission...

The first waterfall in the first National Park we visited in Thailand was the Haew Suwat. Josh's research had uncovered this amazing gem located in Khao Yai National Park. Unfortunately almost as soon as we had our kayaks off the roof we were shut down by park rangers and pinballed from authority to authority until the big boss of the park told us that no-one had ever paddled it and nor were they going too. Of course that made us more determined. 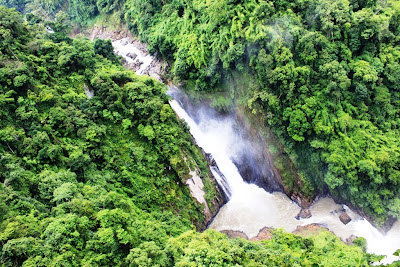 We left the park to paddle other rivers and to formulate a highly ingenious plan. 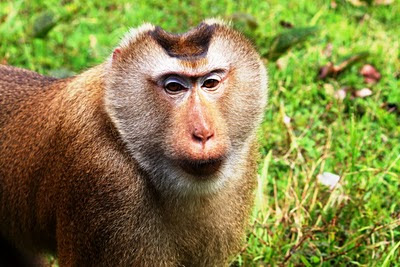 On our way back from Chiang Mai to Bangkok we decided to give it one more shot before dropping Tyler off at the airport. 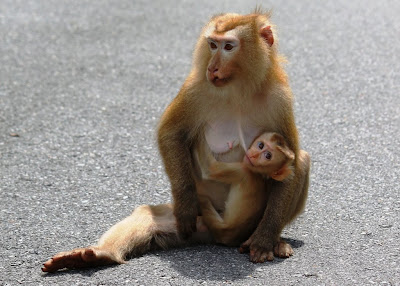 This time we were armed with experience and had an arsenal of ideas to make it past the park rangers and achieve waterfalling.
Plan A: Wait till the rangers close the gates at 5pm, sneak in for a park'n'huck sesh
Problem: There were three gates and all had padlocks, there were also rangers houses in between the gates and the waterfall, 24hour surveillance!
Plan B: Put in upstream of the waterfall, paddle sneakily past the rangers, and hit the drop
Problem: Upstream of the waterfall is the breeding ground of rare Siamese crocodiles which grow up to 3m in length!!! Also there was a lot of dense Tiger infested jungle between us and an alternate put in.
So we had to go with Plan C 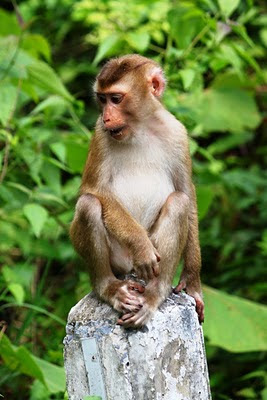 Plan C involved pulling into a side road, fully gearing up, then driving almost all the way to the waterfall at which point we would pull our boats off the roof super fast, stealth through a minimal piece of jungle whilst Josh who couldn't paddle due to injury distracted the rangers. It was reminiscent of Royal Gorge.

Luckily I had prepared for jungle stealth missions by having a green kayak. Tyler was also semi prepared with a green helmet. Lou on the other hand...Pink helmet blue boat... As we broke from undercover and started running full tilt for the river I could hear a ranger chasing us yelling "no, no, stop, no swimming" and Lou trying to explain that swimming was the last thing we were planning. 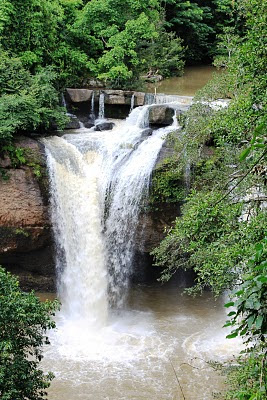 As Josh fended off park rangers while filming with two cameras and taking photos with a third like a star Tyler, Lou and I rolled off the lip and melted into a super soft landing. I broke my paddle in half on impact but theres only so many big waterfalls you can expect a $30 kilwell shaft to stand before it throws in the towel. 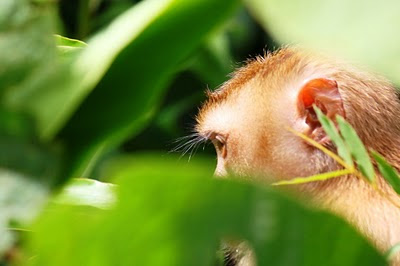 Monkey in the jungle

None of our plans detailed any ideas of how to escape so when the park rangers trapped us by locking the gates we were a little worried. We waited for the police to show up while debating how big the fine would be and would we have to spend a night in a Thai jail. Josh just kept repeating that he hadn't paddled the waterfall therefore he wouldn't have to go to jail. Finally we were escorted to park headquarters, told that we should have asked for permission first, then asked if we would please have our photo taken with all the park rangers and our kayaks. So we're kind of a big deal in Khao Yai and if anybody goes there in the future look out for the shrine with our picture on it!

I'll put up some waterfall photos later, hope you guys enjoyed the monkeys!
Posted by Unknown at 10:24 PM