After the awesomeness that was Dinkey we decided to take a day off kayaking and branch into other forms of recreation such as watermelon art, looking at trees, and bear hunting. Seeing as you have to pay to enter National Parks in the States we stealthed into Sequoia National Park under the cover of darkness and camped illegally on the side of the road for a change. Following beta from a local fisherman 'where can we find bears?' 'you can't buy beers here' 'no bears, like, raaarah (with claw hands)' 'oh beeeaaars' we headed for Halstead meadow where the hunt began. The first bear we found got scared off when Jared Jamie and Brad ran after it so Sanga Rach and I ditched the noisy buggers and hatched a cunning plan to sneak up on another bear from the downwind side. Little did Sanga know that the tree he was standing under had a cub hiding in it - the reason why momma bear wasn't running away. Luckily momma bear was pretty mellow and didn't launch an attack. Happy ending. 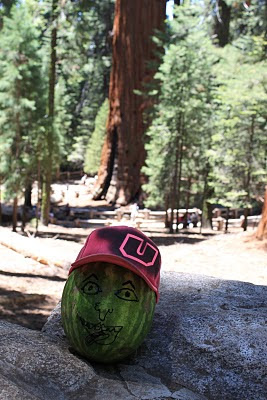 We missed Josh so much that Rach painted his face on a watermelon so we could take him sightseeing with us... 'Josh' in front of General Sherman - the largest living organism on earth Beautiful Sequoia trees in the park 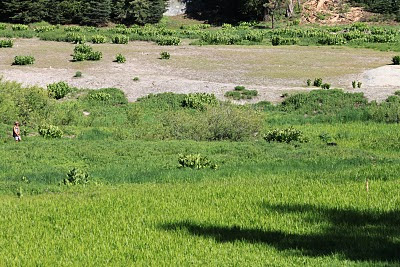 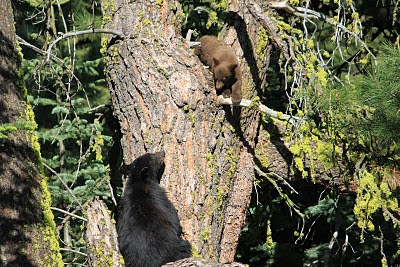 'I told you to stay up the tree until all the Kiwis had left' 'but mooooooommm'
Posted by Unknown at 11:45 AM